KARACHI: For the three 15-year-old students selected to represent Pakistan in one of the largest high school tournaments in the world, The Karl Popper Debating Championship (KPDC), the first-time visit to Mexico became their time to shine.

Not only did the Pakistani team win the final against the team from South Korea, but all three participants were listed in the top 10 speakers of tournament. The titled was achieved after winning through 6 preliminary rounds, 3 elimination rounds and the grand final.

Karachi Grammar School student Zainab Hameed was named the top speaker of the competition while Azeem Liaquat, student of the Salamat International Campus for Advanced Studies in Lahore, came second. Their compatriot, Ahmed Shujaan from the Aitchison College, was not far behind either and bagged the fifth position among more than 200 participants.

Teams from 45 countries came together to debate on a mix of prepared and impromptu motions. The event was a part of the 18th edition of the International Debate Education Association (IDEA) Youth Forum held in Mexico from July 2 to 15.

This topic for the KPDC finals was “Guantanamo Bay prison should be closed down immediately”. Team Pakistan was defending the motion while team Korea had the burden to prove that the motion should not be adopted.

The teams participated in two competitions –the KPDC and the mixed team track. In the former, they represented Pakistan as a team while in the former, they were split up and paired with debaters from other countries.

First time for everything

Asad told The Express Tribune that the society has been running the debating circuit across the country successfully for the past 20 years without help from the government. “Some form of patronage from the government would have helped in grooming the talent.” The expenses of trip were paid by the US-based Open Society Foundations.

After being selected for the competition, a five-day training camp was organised by the debating society in Lahore, following which they continued to research and collaborate for about two weeks through online mediums because Zainab was in Karachi while the other two participants were based in Lahore. “We had a lot of team chemistry right off the bat and that was probably the main reason that we were successful,” said Zainab. She gave credit to the coach and other trainers for strenuously helping them all the way through.

“We didn’t actually have a lot of knowledge about topics like civil liberties and terrorism,” said Zainab while talking about the competition’s theme. “We didn’t even know that the Guantanamo Bay is actually a legal black hole but we had to defend the motion in the finals.” Zainab recaps that the moment their victory was announced, everybody except for the three stunned team members were cheering them on while chanting “Pakistan… Pakistan”.

“It was not only a competition but also a great learning experience during which we got to prove our talent,” said Ahmed.

He recalled one of the most memorable moments for the team when the three performed “bhangra” in traditional Pakistani outfits at the talent night. 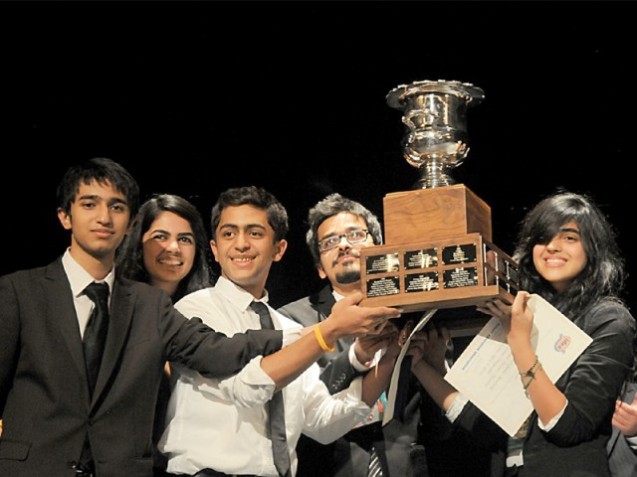