Known as the Majlis-e-Shoora, the seat of the government in the country’s capital, Islamabad, is now wholly powered by the sun.

First announced in 2014, the venture has been funded by the Chinese government as an act of friendship, with the solar power plant costing around £36.5 million.

Now complete, it produces 80 megawatts of electricity, 62 of which are consumed by the national assembly with the remainder going to the national grid, according to Pakistani newspaper Dawn.

Members met in the house for the first time on February 12 as it was being powered by sunshine.

Prime Minister Nawaz Sharif is expected to formally ‘switch on’ the program later this month.

Special secretary at the National Assembly, Munawar Abbas Shah, previously commented: “This is the first project of its kind [in a public building] in Pakistan, and later more public buildings will be converted to solar power to overcome the energy crisis.”

“The consumption of electricity in the parliament even jumps over two megawatts in summers when the house is in session.”

The current electricity infrastructure is inadequate across the whole country, with an estimated 44 per cent of households not connected to the national grid.

The sub-continent suffers rolling blackouts and power outages, and solar home systems have been mooted as a possible solution to the problem.

Israel’s parliament, the Knesset, generates 10 per cent of its electricity from solar power. 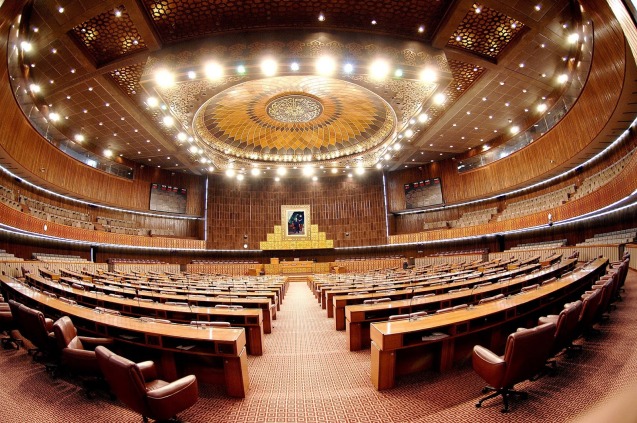 The Parliament of Pakistan, officially termed the Majlis-e-Shoora (Urdu: مجلسِ شورىٰ‎ — Majlis-e Šūrá); is the federal and supreme legislative body of Pakistan.