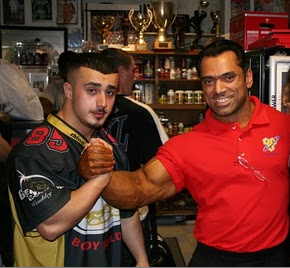 Masoom Butt is A Pakistani bodybuilder who holds the record for most NABA titles (National Amateur Bodybuilding Association) won by an athlete in a single year.

Masoom won the Mr. Asia title at an age of 21 being the youngest ever muscleman in 1993 in Singapore and in the same year he finished fourth in the World Championship.

At the age of 34 Masoom’s ultimate dream is to win the title of Mr Olympia in next three to four years time.

One thought on “PK’s Who’s Who: Masoom Butt (Body Builder)”